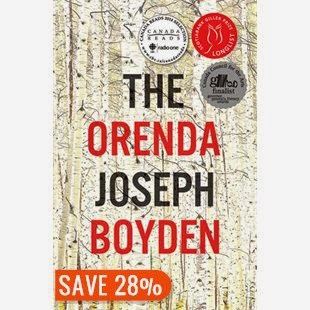 The first book of our Fall season is The Orenda by Joseph Boyden, Colette choice.  Jolene is hosting and present are Carla, Colette, Jane, Janet, Jolene, Michèle and Shirley.  Jolene prepared salmon roll-up sandwiches with quinoa, maple cheddar cheese and a wonderful bison and foie gras pâté among other goodies, wine of course, coffee and tea.

Each year CBC has a Canada Reads competition to determine the Book of the Year. This year the theme was "One novel to change our Nation" and The Orenda that was defended by Wab Kinew, a journalist and aboriginal activist, won.

Joseph Boyden, born in 1966 in Toronto is of Irish and Métis descent.  He was educated at York University and now teaches part time at York and at the University of New Orleans. The Orenda is his third novel. His novel Through Spruce Black won the Giller Prize in 2008.  The Orenda is set in the 17th century in what is now Ontario and Québec and recounts the beginning of French colonization and the downfall of the Wendat-Huron Nation.  The story is told through the eyes of three people, Bird a Wendat warrior, Snowfall a Haudenosaunee girl adopted by bird and Christophe a Jesuit missionary (character based on canonized martyr Jean-de-Brébeuf).  The novel details the interactions of these three characters with the French.

All who read it found that the book was well worth reading.  Not only was it very well written, it also had well developed characters and a rhythm between the three voices thoughout the story.  All thought that there are some very violent scenes described in the book and some read quickly through those passages finding they were hard to read, but none felt that the depiction of the violence was an unnecessary part of the story. The novel also chronicles the impact of disease on the tribes brought by the colonizers and the impact of droughts on crops and the survival of villages.

The Orenda received some very positive reviews, touted as a classic and must read to understand part of Canada's early history.  Some however have criticized it saying that it gives a skewed vision of aboriginal nations as savages.  We all felt that it is certainly worth reading and an important book in English Canadian literature.
Posted by Muse and Views Bookclub at 2:50 PM