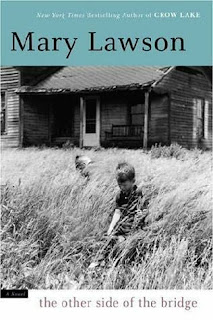 Our meeting was held at Colette's home with Betty hosting. Thank you to Betty for great nibbles and an excellent wine choice. Betty, Carla, Colette, Janet, Joan and Michèle were present. This month's book was The Other Side of the Bridge by Mary Lawson suggested by Joan. This is the second book by Mary Lawson that the Book Club has read. Crow Lake was enjoyed by all members in 2004.

The book was unanimously enjoyed by all members present. All felt that the book was well written and that the story flowed well.  Each chapter began with a headline from The Temiskaming Speaker with the date. This helped the reader understand the chronology of  the two story lines. Carla mentioned and others agreed that Ms. Lawson is excellent at setting the mood and describing the surroundings.
There was considerable discussion about the three main male characters, Arthur, Jake and Ian and the relationship between the brothers Arthur and Jake.  Janet compared them to the twin sons of Isacc and Rebekah in the Bible,  Esau and Jacob, the good and the evil.  There was a discussion about why Arthur does not stand up to Jake, how past incidents such as Jake's fall from the bridge affect Arthur's reaction to Jake's presence and actions. Many felt that Arthur's reaction was fuelled by guilt and his need to atone for failing to properly protect his brother and disappointing his mother.
We also discussed how Ms. Lawson managed to keep suspense in a story line even though we knew from the beginning what eventually unfolded in the story. A good example is at the beginning of the book when Jake insists they play the knife game.
We also discussed Ian's character, his denial as an adolescent of his eventual life choice to f become a family doctor taking over his father's practice. Again, it was evident from the beginning what Ian's choice would be but Ms. Lawson still kept suspense in the story line.
This was a good choice, thank you Joan.  For those who have not viewed the video interview available on the left side of the blog, it is interesting to hear Ms. Lawson talk about her writing style and the connection she made between her two novels.
A "Name the Book Club" competition was held. Six suggestions were nominated:
From a secret e-mail ballot, the name that won is "Monthly Muse and Views", suggested by Jolene.  All agreed that it is a good choice for the name of our Book Club. We also agreed to shorten the name to "Muse and Views".
We also held our "Academy Award" of books read in 2008.  A Thousand Splendid Suns the book suggested by Michèle won easily.
Posted by Muse and Views Bookclub at 8:40 AM No comments: