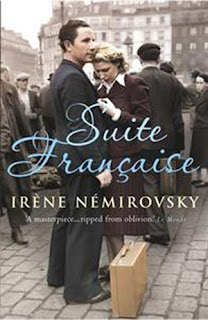 We met Jolene's home last night for our final evening before the summer hiatus.  The book was Suite française by Irène Némirovsky, Colette's choice.
Colette summarized details about the author's family life, originally as a refugee from Moscow during the Russian Revolution.  She had a good relationship with her father but not her mother.  Ms. Némirovsky, a proflic and famous writer from an early age, married in 1926 and had 2 daughters.  Because of her Jewish background, she was arrested in 1942 and died in a prison camp a month later of typhus.  Her husband died in a gas chamber, and her nanny escaped with the children.  Suite française was published by daughter Denise some 64 years after being written, having been kept closed for a long time because the family mistakenly thought it was a diary too painful to be read.  The author received an award posthumously.  Many of these details are included in Appendix 2 and the prefaces in the book itself.
Most of the club ladies liked the book, though  there was some some ambivalence, especially on the part of a few who could not attend in person but gave me their comments.  We found it interesting that the author did not write about the events of WWII from her own Jewish perspective, but was successful in portraying the thoughts of so many others, including a memorable scene involving a cat.  The class consciousness in France was a topic of discussion, as was the flight from Paris of so many when the German occupation began.  For Jolene personally, the book gave her a context for her own childhood experiences on a Canadian Air Force base in post-war Germany.  The appendices also reinforced her feeling that family letters that have been preserved from those days are of real value in capturing history through the eyes of everyday people.
Posted by Muse and Views Bookclub at 9:57 AM 1 comment: