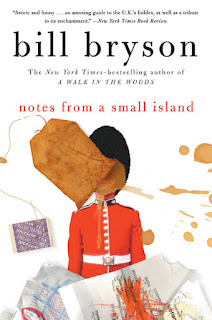 Our host this month was Carla and the book choice was Colette's Notes from a Small Island by Bill Bryson.  Betty, Carla, Colette, Jane, Jolene and Michèle were present. Carla had prepared a proper English tea for us,  fancy sandwiches, cucumber, radishes, cream cheese and tuna, without crusts and cut round and triangles, wonderful sandwiches and scones with clotted cream and jam. Of course we were also served a proper tea in a proper china tea set.

Before we begin discussion about this month's book, Jolene has a suggestion about the May book The Forgotten Garden by Kate Morton.  It is a voluminous book with many characters.  For those who will not be reading it in one or two long sittings, she suggests that you keep a record of the characters and their relationships.  This will help in remembering what has previously happened in the story.

Colette gave us some information about the author Bill Bryson.  He is an American writer who lived in Great Britain for several years.  He has written several travelogues such as this month's book, A Walk in the Woods and Down Under and books about science such as A Short History of Nearly Everything.   He is presently living in Great Britain.

We all found some parts of the book amusing, some of us more than others.  There is a theme of love of the country and its people throughout the book that is obvious.  His powers of observation are excellent that lead him to describe many anecdotes with detail that may seem trivial but end up by becoming important in the story. He describes his encounters in scottish pubs that reminded some of us of similar encounters with people in Scotland, an accent and expressions so particular to the Scots that it was very difficult to follow any conversation or answer their questions!  He comments that the British would make good communists, not because they would want other than a democracy but rather that they tend to accept what cannot be changed, what they have no choice but to endure without protest such as line-ups for the train or traffic on the highways.

In general most enjoyed the book and its anecdotes that made them laugh.
Posted by Muse and Views Bookclub at 1:24 PM No comments: