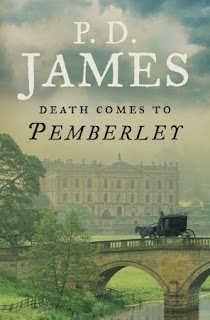 The March meeting was held at Carla's home.  Wonderful brie cheese with a spicy pepper jelly, samosa and toasted asparagus bites were tempting.  Carla also served us a sticky toffee pudding that was sublime! Beth, Betty, Carla, Colette, Jane, Janet, Jolene, Michèle and Shirley were present.  We were missing only Linda who will be back next month!

We discussed Colette's choice Death Comes to Pemberley by P.D. James, a sequel to Jane Austen's Pride and Prejudice.  P.D. James is well known as a detective and mystery writer from Great Britain.  Her books featuring investigator and poet Adam Dalgliesh are well known and loved throughout the world.  She began writing in the 1950's and published her first novel in 1962 Cover her Face. P.D. James, after the publication of her last mystery novel with Dalgliesh as the main character The Private Patient decided that since she had turn 90, she could indulge in her two loves, writing detective novels and Jane Austen novels.  The result was Death Comes to Pemberley.


Pretty well all our members have enjoyed Jane Austen novels and most also enjoyed this book.  However, one member felt a bit like Ms. James thinks Jane Austen would have responded.  P.D. James should have left well enough alone.  All thought that she did very well in capturing the voices, characters and atmosphere of Austen's novels.  There have been many sequels to Miss Austen's stories, not many that have been successful and  P.D. James certainly is more successful with this novel.  One of our members noted that Carrie Bebris' sequels that are written as murder mysteries are probably among the best.

Ms. James succeeded in keeping the suspense of this murder mystery.  None of us guessed before the end who had murdered Captain Denny.  She succeeded in pointing the finger towards others such as Fitzwilliams that we all suspected at one point in the novel or maybe Mrs. Bidwell?  It became obvious however, that it could not be any of Jane Austen's beloved characters, not even Mr. Wickham who was formally accused and brought to trial could be the murderer.  We did after discussion note that with twist and turns, clues are planted through out the novel pointing to the ailing young Mr. Bidwell. We wondered how realistic it could be that the young Mr. Bidwell, who was on his deathbed could have summoned the energy to be able to hit Captain Denny with enough force to kill.  However, it is explained away by his all encompassing desire to avenge his sister's "supposed" rape.

Sequels with stories and characters from another author's novel is certainly quite a challenge and we thought that P.D. James succeeded in integrating more "modern" aspects such as Georgiana's selection of a husband that she could do herself since she was of age and it was a new era. In a true Jane Austen story, Georgiana's choice would have not been hers alone.  Ms. James also described some of the differences in an investigation and trial in modern times and in the 19th century and this was appreciated, especially by our lawyer member.

There was some criticism.  We felt that Elizabeth's sparkling personality and independent spirit is missing in this novel.  We also wondered why Darcy seemed so unsure of himself and his choices, very unlike the self assured personality he displays in Pride and Prejudice.  Some felt that we had little insight into Elizabeth's and Darcy's relationship.  The only time they actually talked was in the Epilogue and they discussed what had happened back before their marriage.  Some felt that though Elizabeth and Darcy were characterized as excellent parents, they spent little time with their children, probably typical of that class of society in the 19th century.

All in all we were glad to have read this novel and appreciated the effort P.D. James made to make quite a successful sequel to Pride and Prejudice.
Posted by Muse and Views Bookclub at 11:30 AM No comments: