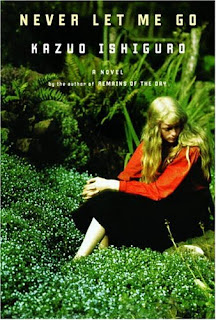 Our host for the last meeting of the Muse & Views Bookclub before the summer break was Linda.  Present were Beth, Carla, Janet, Jolene, Linda, Michèle and Shirley.  Linda prepared a great snack for us with of course, both red and white wine, always present at our meetings.

The book choice was Beth's Never Let Me Go by Kazuo Ishiguro.  Mr. Ishiguro is a Japanese born British author well known for his book The Remains of the Day that won the Man Booker Prize and was made into a very popular film.  He has written 6 novels, plays and short stories. Never Let Me Go has a science fiction base as it is about cloning.  Though there is nothing in the story line that describes the raison d'être Hailsham, it becomes evident as we progress through the novel that these children are being groomed for the  health benefit of others.  The story is narrated by Kathy who is in her mid-twenties at this point and as she tells us her story and her friends Ruth and Tommy, she goes back and forth in time.

This book generated the most interesting, fulsome and animated discussion of any book in the past year.  While some of us liked the book some of us did not like the writing style.  However, we came to a consensus that maybe the style was dictated by the age and limited experience of Kathy the narrator. The book has a moody, dark and sad atmosphere. All of us were horrified by the emerging plot and realization of the reason for Hailsham and the acceptance of society for the program.

Some of the comments from members were that this book reminded them of books such as 1984 and Brave New World, both books about how society can be controlled and truth skewed.  Gattaca, a story about genetic enhancement was also mentioned. Some compared the control of society as similar to slavery.  The movie The Island, also about cloning was also mentioned.

We had a lengthy discussion about the ethical issues around the use of others to benefit ourselves or members of our family such as couples who have another child to help an ill older child with the harvest of a kidney or the bone marrow transplants.  We also talked about gender selection, genetic enhancement and other ethical issues.

Linda, who did not enjoy the book, decided to read other novels from Mr. Ishiguro.  She read The Remains of the Day and When We Were Orphans.  She felt the need to understand why he is such a celebrated author.  She recommends we read When We Were Orphans that she says is the best of those she read.

Have a great summer and we shall see you all in September!
Posted by Muse and Views Bookclub at 12:17 PM No comments: