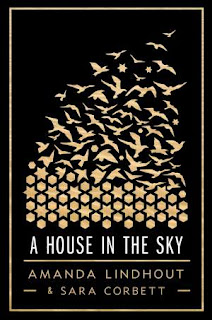 This month's book was Betty's choice A House in the Sky - A Memoir by Amanda Lindhout and Sara Corbett.  It is an account of Canadian independent journalist Amanda Lindhout's kidnapping in Somalia. Our host Linda had wonderful pinwheel sandwiches, cheese and crackers with smoked salmon.  Red and white wine of course, and a very nice New York style cheesecake with tea and coffee. Present were Beth, Betty, Carla, Colette, Jane, Jolene, Linda, Michèle and Shirley.

Ms. Lindhout has been in the news lately because one of her captors has been arrested in Canada by the RCMP and she has also given support to Alison Azer, the Canadian woman whose children were taken to Iran by her former husband.  Betty gave us a synopsis of the press articles that have recently appeared.  For example, Ms. Lindhout agrees that governments should not pay ransom money but she feels that family who choose to raise the money should not be harassed.

We had a very animated discussion about this memoir.  We agreed that the book was very well written, a page turner and as she recounted her experiences, there was not a feeling of "woe is me". It was written with clarity and power. Sara Corbett steered the writing style well.

However, we all felt that Amanda made several poor choices throughout her travels that finished with the worst choice she made when she went to Somalia despite being discouraged by several people including her mother and seasoned journalists.  We all felt that she was naive at best and stupid not to heed the opinions of others.  We disagreed somewhat on the reasons why she kept choosing more and more dangerous countries in her travels. Several were irritated and angry by her poor choices and lack of forethought. Some of us felt she had no real guidance as a child from her mother or her father.  Chaos, violence and uncertainty were the norm in her childhood. Her refuge was found in the National Geographic magazines that she read and she dreamt of seeing the world. For whatever reason, she chose countries that were more and more unstable as if she was convincing herself that nothing would go wrong.

We also discussed her on and off boyfriend, Nigel Brennan.  Few of us liked him, some did, but even though he was older than Amanda, we all felt he had a weak personality and easily manipulated.  He lied several times to avoid conflict with Amanda and other women in his life.  Nigel wrote a book in 2011, The Price of Life, co-written with his sisters.

During her captivity, Amanda was very resourceful and clever.  She used everything available to her to survive, to influence her kidnappers, to stay sane and to allow her to tolerate the indignities, the violence and cruelty she endured.  She convinced Nigel early in their captivity that it was to their benefit to convert to Islam. She requested English versions of the Koran for herself and Nigel. She learned the required prayers.  Until they were separated, she and Nigel befriended the young guards, learned about their life, their goals.  However when they were separated, the guards' attitude towards her changed. She was kept in a dark room, she could no longer read. Any small pleasures she had such as scented soaps, were taken away and Amanda was raped and beaten.  During this period she coped by making mental lists of good experiences she had had; it is at this time that she created "The House in the Sky"  where she could mentally go and find herself with her mother, friends and family.

Amanda and Nigel spent 460 days in captivity and were finally released when their families, with the help of a private organisation, managed to raised enough money to satisfy the kidnappers.  Amanda created the Global Enrichment Foundation that provides Somalian women and girls with the opportunity to empower themselves through education and training.  Amanda spends a lot of her time raising money and awareness for the Foundation.

It is not a book that you "enjoy" however one that allowed us to become aware of the dangers journalists and travelers confront in countries such as Somalia.

Posted by Muse and Views Bookclub at 10:47 AM No comments:

2018
Shirley's choice A Gentleman in Moscow by Amor Towles

2016
Carla's choice of A Man Called Ove by Fredrik Backman

2015
Jane’s choice of All the Light We Cannot See by Anthony Doerr.

2014
Beth's choice of The Rosie Project by Graeme Simsion

2012
Betty's choice of The Book Thief by Markus Zusak

2010
Shirley's choice for The Book of Negroes by Lawrence Hill

2008
Michèle's choice for A Thousand Splendid Suns by Khaled Hosseini

2007
Linda's choice for City of Joy by Dominique Lapierre

2018
Shirley's choice - A Gentleman in Moscow by Amor Towles

Posted by Muse and Views Bookclub at 1:14 PM No comments: