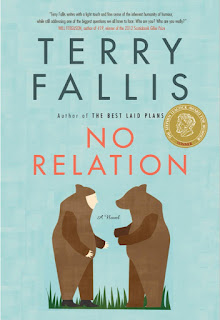 The book this month was No Relation by Terry Fallis, Linda's choice.  We met at Michèle's new home and she served a fig and walnut dip with vegetables, pear, chèvre and procuitto tarts and a pâté. In honour of Marie Antoinette in the novel, we had a fancy chocolate cake.  Betty, Carla, Colette, Jane, Jolene, Linda and Michèle were present.

The author Terry Fallis is a Canadian from Toronto who was educated as a mechanical engineer but never practiced.  He developed a career as a political strategist working with politicians both at the federal and provincial levels.  He maintained a blog mainly as a political pundit and at one point decided to try his hand writing a novel.  His first novel, The Best Laid Plans, he self-published and it was later picked up and published by McLelland & Stewart. It won the 2008 Stephen Leacock Medal for Humour and won the Canada Reads competition in 2011. He has written to date, 5 novels and is presently working on a 6th novel.

Everyone enjoyed this book, the second novel we have read by Terry Fallis.  It is a funny, insightful novel that tells the story of a man who shares his name with the American author Ernest Hemingway, with a slight difference in spelling Earnest Hemmingway.  He forms a self-help group with other persons who have names of famous persons and together they help each other out with their frustrations that come from sharing a name with a well-known person.  A camaraderie and close friendship develops between the members of the group and their experiences make for funny and often poignant situations.  There is also a second story in this novel about Earnest's family business called Hemmingwear that adds to the complexity of the novel.  All agreed that the book was very enjoyable, easy to read and interesting giving us chuckles and out right belly laughs.

Jolene was intrigued by the cover design that has a bear and a person dressed in a bear costume facing each other.  After some discussion we came to the conclusion that it must represent Ernest Hemingway, the American author who was a bit of a bear in stature and look and who apparently had a real bear as a friend and the principle character of this novel Earnest Hemmingway.

Thank you Linda for a great read!
Posted by Muse and Views Bookclub at 12:25 PM 2 comments: 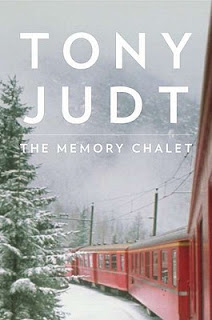 Beth, Betty, Carla, Colette, Jane, Janet, Jolene, Linda, Michèle, Shirley were all present, all members of our Book Club were with us. Jane hosted and we had some wonderful cheese, a nice variety of crackers, wonderful compotes and jellies.

Our book this month was The Memory Chalet By Tony Judt, Michèle's choice.  Tony Judt was born London in 1948 of secular Jewish parents who were British Citizens.  He did a B.A. at  Cambridge, then a year at l’École Normale  Supérieure in Paris and then obtained a Ph.D. in History from Cambridge in 1972 specializing in French History.  He taught at several colleges and universities in England and the U.S. before settling in New York in 1987.  He is known for his academic books, essays and he was also a frequent New York Review of Books.

In early 2008 he was diagnosed with ALS and he died in late 2010,  two years after being diagnosed. The Memory Chalet was published after his death.  The book is a memoir,  some saw it as a diary, of his most vivid memories of childhood and life as a student and a young professor. Since ALS robbed him of the ability to write or even type, he would during the night write whole stories in his head and "park" them in one of the rooms of a Chalet he had been to with his parents as a child. In the morning he would retrieve them and dictate them to an assistant.  The idea came to him from Jonathan Spence's book The Memory Palace of Matteo Ricci in which Spence describes a method used by European scholars for centuries. Matteo taught the Chinese the Western memory technique which was to associate ideas with images and locate those images in fixed spatial relation to one another.  Hence the Memory Chalet with different rooms that could be filled with memories.

Most liked the book and found Judt's excellent writing allowed us to visualize the experiences he was describing such as his neighbourhood Putney; Paris as a student in the late 1960's when students were protesting everything and anything; his experience in a kibbutz and his reflections on the positive and negative impact on his life.   He was very honest about and insightful about his life and experiences. We were impressed by the detail of the information he was able to provide, all from memory.  We felt that the preface was just long enough to allow us to understand ALS and how it affected him and then he barely mentionned it through out the chapters describing different aspects of his life.  He finishes with a reference to trains, his favourite mode of transportation.


"We cannot choose where we start out in life, but we may finish where we will. I know where I shall be going nowhere in particular on that little train, forever and ever."

Several of us reflected on the idea that it was his way of seeing eternity. Trains were his favourite place to be.

Posted by Muse and Views Bookclub at 9:06 AM No comments: