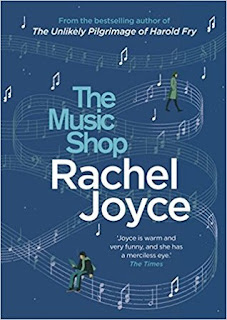 The October meeting of Muse & Views Bookclub was hosted by Betty. Present were Beth, Betty, Colette,  Jane, Janet, Michèle and Shirley.  Betty had prepared deviled eggs, cheese, olives and a great apple pie for dessert.  Of course, wine, coffee and tea were also available as usual.

This month's book presented by Jane was The Music Shop by Rachel Joyce.  We read a couple of years back one other book, The Unlikely Pilgrimage of Harold Fry, by the same author.  Ms. Joyce is a British author who has written several plays for BBC radio and adaptations for BBC television. She has also worked as an actress with several theatre groups in London.

Most of our members enjoyed the book and saw it as love story with a lovely nostalgic atmosphere and a bit of fantasy. The characters are well developed. Music plays an important role in this story and Frank, the main character, is a very tender, lovable person that seems to have "magical powers" when it comes to music. He has a special gift of knowing what music a person needs to hear for whatever is ailing them or what is going on in their life. We learn more about Frank in chapters that take us back to his youth living with his eccentric mother. Although she is not a particularly nice person, she taught Frank all he knows about music.

We get to know other shopkeepers on the small community of Unity Street and their characters; although they do not play major roles, they are well developed. Maud is the typical London woman with her tattoos and weird clothes. Kit, Frank's assistant, is a young man who is excited to be working and enjoys learning from Frank.

Early in the story a young woman faints in front of Frank's store and as he tries to revive her he feels an immediate connection with her that he tries to deny. We meet Ilse Brauchmann and so the love story begins between Ilse and Frank. He teaches her about music, introducing her to different pieces at weekly meetings. They develop a certain rapport but there is something on both their sides that keeps them from developing a deeper relationship and then Ilse disappears.

This is a touching story with a good ending and the music, very eclectic, is wonderfully interspersed and woven into the story. There is a playlist on Spotify. Thank you Jane for an excellent read.


Posted by Muse and Views Bookclub at 3:53 PM No comments:

Six Degrees of Separation from The Outsiders to Unbowed

The Outsiders, a novel by S.E. Hinton, is considered a Young Adult novel but read widely.

The Book Thief  by Markus Zusack is a novel about children coping with the ravages of war and is also considered a Young Adult novel and it was also read widely.

The Kite Runner by Khaled Hosseini is also a novel about children coping with the ravages of war. Going with another novel by the same author is the next linked book, A Thousand Splendid Suns.

There are many titles that include the earth’s star,  the sun; Half of a Yellow Sun by Chimamanda Ngozi Adichie is a prime example. There are several excellent women authors from Africa as is Ms. Adichie, one of which is Ayaan Hirsi Ali. Ali’s memoir Infidel has also been read by our book club.

Infidel being a memoir that chronicles Ms Hirsi Ali pursuit of justice through the political system as a woman of colour, we might connect with Unbowed, a Memoir by Wangari Maathai in which she recounts her life as a political activist, feminist and environmentalist in her native Kenya.

From a young adult’s life of survival to a woman of colour and political survival.

If you would like to see how other avid readers and participants have done, go to Six Degrees of Separation

Posted by Muse and Views Bookclub at 10:56 PM 2 comments: