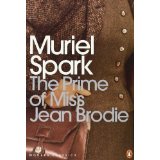 We discussed a classic novel, Beth's choice, The Prime of Miss Jeanne Brodie by Muriel Spark.

She was born Muriel Sarah Camberg in Edinburgh in 1918 and was educated in private schools in Edinburgh. She married Sydney Oswald Spark in 1937 and they moved to Rhodesia shortly after their marriage.  They had a son, Robin, in 1938.  Muriel soon realized that the marriage would not work and left to go back to the United Kingdom in 1944 leaving her son with his father.  She worked in intelligence during the war.  She began writing after the war, beginning with poetry and literary criticism. Her first novel was The Comforters published in 1956.  She published 22 novels. The Prime of Miss Jeanne Brodie published in 1961 was her most successful novel. It was presented as a play and a movie starring Maggie Smith in 1969. Ms Smith won an Oscar for her role as Miss Brodie. After living some time in New York she moved to Italy where she met an artist Penelope Jardine. They lived together in Tuscany until Ms Spark's death in 2006.

Since many of our members are or were teachers, the discussion was mainly about Miss Brodie's teaching methods and the influence she had on her students.  She was a charismatic person, who influenced a particular group, The Brodie girls, and excluded others.  She was able to get away with many indiscretions. It was interesting how much she could manipulate and influence her pupils in comparison with what is possible in today's society.  Miss Brodie had her definite preferences in her pupils and those not in her close circle clearly suffered.  She also more or less ignored the curriculum and taught using her own experiences as examples.  She talked about how she was in her prime and the experiences she had as a woman in her prime.  Some of the sections when she talks of her prime are entertaining and even hilarious.

In the end, one of the book's theme is betrayal.  She betrayed many of her students ignoring some and unduly influencing others to their detriment. And she was betrayed by one of her students. She never discovered who betrayed her.

Posted by Muse and Views Bookclub at 3:04 PM No comments: