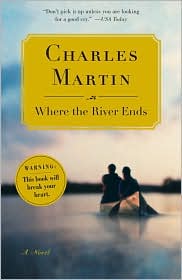 Before beginning the discussion on this month's book, the "Academy Award" of 2010 was announced.  Each member had the opportunity to vote.  The Book of Negroes by Lawrence Hill recommended by Shirley received 5 of the 10 votes. The Boy in the Moon by Ian Brown recommended by our newest member Jane, came in second with 3 votes.  Congratulations Shirley!

Charles Martin is an American author who lives in Florida.  He has several degrees including a Ph.D. in communications.  He has written 7 novels; Where the River Ends is his 6th book.  He was inspired to write the book when he met the parents of a young woman whose husband served her with divorce papers in the hospital.  As he paddled down St. Mary's River in his kayak, the story of Abbie and Doss developed in his mind, thinking about the spouse who stays through the journey while his wife slowly dies.

Generally everyone enjoyed the book except for one person who found the story too incredulous to be believable.  Most of us have known someone who has died or is living with cancer and in many ways the story touched us as we thought of the persons we knew.

Many saw a correlation between the journey down the St. Mary's River and the journey cancer victims take through the many treatments as they strive to beat the disease.  As Abbie began treatments, she lost her breast, her hair because of the chemo.  She lost all her physical beauty, all hope of a cure or treatment that would allow her to survive and she is left with only the will to continue.  At the beginning of their voyage down the river they are robbed of everything they brought with them except for one canoe, a paddle and Abbie's medication, the bare minimum needed to continue the journey. Only their will to finish the journey survives. Several of us, however, grew tired of the river descriptions and some skimmed the descriptions of the river banks, the bends in the river and the vegetation.  Many of us liked the end of the book and the connection Doss finally achieved with his father-in-law.

The discussion turned to coping with illness and how hope is necessary to have the will to continue when faced with an illness such as cancer.  Several of us relayed experiences we had witnessed.  It was for several of us, the opportunity to share.  Thank you Betty for a good choice.

Those who chose not to read the book because you knew you would not attend this meeting might want to pick up the book.
Posted by Muse and Views Bookclub at 2:51 PM No comments: