On January 27, 2020, our club met at Marg Bisch's home to discuss Carla’s book choice, Where the Crawdads Sing by Delia Owens. In attendance were Marg, Shirley, Carla, Colette, Betty and Beth. As there were four members missing from our group this month, it was decided that the announcement of the Muse & Views Academy Award for the 2019 book of the year would be postponed until April when attendance would be back to normal.

For her debut as a host, our newest member received rave reviews for preparing a delectable buffet of foods that appear in the novel: shrimp with sauce, hush puppies and corn fritters, tiny chicken pot pies, and finally, a marvelous buttery peach cobbler. Marg added to the ambiance with a display of feathers, shells and 'fireflies', evoking Kya's collections from the marsh!

Where the Crawdads Sing has been a bestseller for over a year. It is written by a woman whose first career was as a zoologist (PhD) who spent 23 years living in remote areas of Africa with her husband, observing and writing about the social behaviour of lions, elephants and hyenas.

Owens says she grew up in South Georgia as an ‘outdoors girl’, whose mother encouraged her to venture into wild places and learn about them, often using the phrase, "go out where the crawdads sing". Her family regularly vacationed in the outer marshes and swamps off the North Carolina coast, the setting she chose for this novel.

When she was planning the book, Owens says she was intrigued by the idea of a character who combines some of her own experiences and interests: living alone without one's group; living closely attuned to the land and wildlife and learning their secrets; trying to adapt and survive with the knowledge and instincts we have. The book has elements of several genres: orphaned child; coming of age; survival in the wild; love story; murder mystery; courtroom drama; social criticism, etc.

The novel moves back and forth between the present, a mysterious death in a small town on the North Carolina coast, and the past, where we follow the story of a six year-old girl who lives in a shack in a remote part of the coastal marshes and has to fend for herself after her dysfunctional family abandons her. These two plot lines converge in a suspenseful courtroom drama and shocking conclusion.

Almost everyone loved this book. Many members described their intense sympathy and awe for the main character, Kya, and her intelligence, resourcefulness and resilience in a hostile world. Other characters who help and care for Kya (Jumpin', Tate) were felt to be well-rounded and memorable. While a couple of readers found parts of the scenario unbelievable, one admitted that there are some real-life examples and all felt it is well-written and easy to read. Members commented on how vividly the writer brought the marsh region to life, especially because it's not a typically ‘beautiful’ landscape for many. The descriptions of the sky, lagoons and the insects' behaviour are all poetically, and sometimes disturbingly, drawn for us. Most of us liked the clever plot line and compelling suspense of the murder trial with its push and pull as we are expecting one verdict and one answer, but are surprised by the eventual outcome. However, a couple of us picked up subtle clues Owens leaves early on. Our lawyer member said she enjoyed the crime story aspect but we all found much to enjoy and ponder - most movingly, the theme of loneliness and the long-term effects of living in such pain and isolation, looking for something to love and trust.

Posted by Muse and Views Bookclub at 3:53 PM No comments: 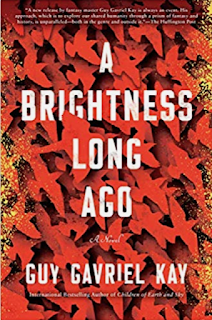 Our November meeting was hosted by Beth. Present were Beth, Betty, Carla, Colette, Jane, Janet, Linda, Michèle and Shirley.  Beth had some very nice cheese, olives and a pâté.

This month we discussed Shirley's book A Brightness Long Ago by Guy Gavriel Kay.  Mr. Kay is a Canadian author born in Weyburn, Saskatchewan. He worked a year with Christopher Tolkien to help edit J.R.R. Tolkien's unpublished works.  He also worked as a writer for the CBC radio series The Scales of Justice.  His first book, The Summer Tree, was published in 1984. He is considered a fantasy fiction writer of novels that have a historical aspect.  They are usually in fictional settings  that resemble real places such as in China, Italy, Spain or Turkey taking place during real historical periods.

A Brightness Long Ago tells the story of a power struggle between mercenaries to take over the Court in fictional Batiara after the murder of its brutal ruler by a young strong woman, Adria.  The Beast as he is called, has young women brought to him that he rapes and kills.  Adria has decided to end his rule by posing as his next victim and kills him by poison from her lips.  The story is told by a merchant of the Court, Danio Cerra who helps Adria escape after she poisons the Beast and finds himself in the middle of the struggle to take over the Court.

For several of our members this was their first fantasy novel and many found it very interesting.  We all found the characters to be well developed and the writing lyrical and poetic at times.  There were several characters both major and minor, all well described and developed.  The only character some thought we did not get to know was the narrator Danio. Some thought there were too many descriptions of battles and the slaughter of people.  We also had a discussion about how and when the story should have ended, some of us thinking that the death of Adria should have been the end.  One of our members, who is an avid reader of Guy Gavriel Kay, felt that ending the story at that point would be too devastating and dramatic.  We agreed, whatever our opinions of the book, that Mr. Kay is an excellent storyteller.

As with many books where opinions differ, we had a great discussion.  Thank you Shirley for introducing us to this very interesting Canadian author.

Posted by Muse and Views Bookclub at 11:14 AM No comments: