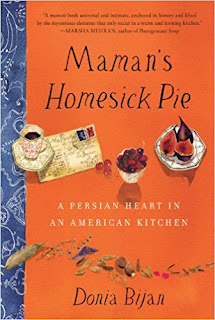 We met at Colette's with Jane hosting to discuss Michèle's book choice Maman's Homesick Pie by Donia Bijan.  Jane provided some lovely cheese, pâtés, olives and very nice dolma.  As Donia made while training to be a chef, Jane made a cherry clafoutis and madeleines.  Of course wine, tea and coffee was also served.

Michèle did not go into great detail about Donia Bijan as author since this book is a memoir, however, she did tell us that Ms. Bijan has written a novel which came out in March called The Last Days of Café Leila.


This book is a memoir that begins when Ms. Bijan has to clean out her mother’s home after her death.  She discovers in a kitchen drawer, her mother's recipes and as she goes through them memories of  her childhood in Iran, her family’s escape when the Shah was overturned, their life in the United States and her path towards becoming a chef come to her and she writes about their life through stories, often related to these recipes.

Her father, a physican in Iran along with her mother who was a nurse, built a hospital in Iran.  They were well known and her father was a well-regarded physician.  They lived with Donia and her two sisters in apartments above the hospital.  Donia describes well their life, their school life and family outings.

Donia’s mother became involved in politics and campaigned against the revolutionary movement.  During a family vacation on Malta, the  revolutionary movement ousted the Shah.  Donia and her family were not able to go back to Iran and eventually emigrated to the United States.  Donia’s mother who had studied nursing in England adapted well to their new situation.  However, her father, who was unable to practice medicine in the U.S., did not adapt well.  Eventually he went back to Iran and his hospital.

Each chapter finishes with recipes her mother used beginning with a cardamon tea,  Often in the chapters, Donia tells stories of their life in Iran and when some of the recipes were made.

Donia’s style of writing was very easy and pleasant to read. Some of us described it as gentle.  We learn a lot about the Iranian and Persian culture.  We get to know her parents and Donia well.

The book was well liked by all members,  everyone finding it easy to read and enjoyable.  We were saddened by the fate of her parents when eventually they find themselves living separate lives in separate countries.  We were astonished to learn how difficult it is to become a chef, the non-paying jobs, the menial jobs, the long and crazy hours that aspiring chefs, including Donia, have to endure to hopefully achieve success.  The only criticism some of us had about the book was how little we learned about Donia’s sisters.

Six Degrees of Separation - From Room to The Book Thief

So this is my first participation in the Six Degrees of Separation game and I not sure I have understood it completely, but here goes.  I am using my Muse & View Bookclub list to link books to Room. We have not read Room but I have.

So the first link is obvious, we just read The Wonder by the same author Emma Donoghue.  As you will see from the summary of our meeting, not everyone like it.

The next link is by title to Year of Wonders By Geraldine Brooks.  A story that can be considered historical fiction with strong women as characters.

The next link via historical fiction and strong women is The Book of Negroes by Lawrence Hill.  This book is also about the struggle of a minority to be free and be considered full members of society.

So there are other books we have read about the struggle of minorities, the one that stands out the most I think is The Help by Kathryn Stockett.

The next link is maybe a bit of a stretch, but in Sarah's Key by Tatiana de Rosnay, we witness the struggle of the jewish minority in Europe during World War II.

We have read several novels that take place during World War II and I think the best link to Sarah's Key is The Book Thief by Markus Zusak.

So there is my contribution.  Would love some feedback!

Posted by Muse and Views Bookclub at 9:53 AM 3 comments: