Thank you to Janet for hosting our meeting. The hors d'oeuvres and blueberry pie were great. Especially appreciated was the service! Maybe your server would like a contract for future meetings Janet??

Linda, Shirley, Joan, Jolene, Michèle and of course Janet attended the meeting.
Each year at the January meeting, the Book Club gives out it's Academy Award to the member who recommended the book read in the previous calendar year that was most enjoyed by the members. City of , recommended by Linda won this year. Congratulations Linda! Jolene bought a book as prize. There was also a runner-up prize but since no other book received more than one vote, we decided to save the runner-up prize for next year.
This meeting's book was by Farley Mowat. A Canadian born in , Mowat lived many years in the out posts of . He is well known for his books on wildlife and many of his books were written for children. He is a somewhat controversial author because of his views that he has clearly articulated on subjects such as the baby seal hunts or whale hunting in his books and in the press. Many Newfoundlanders are not appreciative of his opinions and have not enjoyed his description of personalities in this particular book and others. 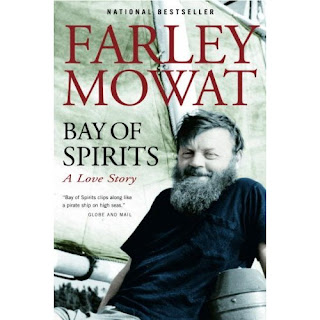 is focused on life in the out ports. Through accounts of boat trips with Claire, his second wife over several summers and a few years in the 1960's he describes the out ports and their residents in quite colourful detail. His descriptive powers are excellent; we can easily imagine the houses perched on rocks. He is a great storyteller and some of us wondered how accurate his stories were, especially some of the sea escapades on his boat Happy Adventure.
We wondered how generous he was in comparison to how they were with him. Many of the residents in out ports he visited gave him food and help with his boat. He was quite evidently focused on himself and his causes.
Though the book has a subtitle A Love Story, and there is quite a bit about his relationship with Claire that he meets while still married to , the book definitely has a political bent. Awareness of the over fishing and the destruction of the fishery came out in this book as did the baby seal issue and a definite dislike for Premier Joey Smallwood.
Most members enjoyed the book mainly because of Mr. Mowat's easy storytelling style.
We also talked about books we have enjoyed and about other lists of book. We talked about Yan Martel and the books he has been sending to Prime Minister Harper. There is even a website that describes the books and includes the letters Yan Martel has written to Mr. Harper.
Posted by Muse and Views Bookclub at 3:38 PM 1 comment:

- (please note--the 4th Monday is Easter Monday so we have moved the club date to March 31) Jolene's choice, Life of Pi by Yann Martel at Beth's home

-Beth's choice, The City of Falling Angels by John Berendt at Linda's home

- discussing the movie (also available as a book), The Last King of Scotland, Linda's choice at Joan's house. (Linda has made the video available for summer viewing)

Posted by Muse and Views Bookclub at 5:58 PM No comments:

The story concerns a polish priest living in West Bengal, India, Stephan Kovalski, who is trying to help and understand life in a Howrah slum (across the Hooghly river from Kolkata) called Anandnagar (City of Joy). Among its various protagonists is the rickshaw puller, Hasari Pal who becomes a central figure in the novel. Despite the abject poverty and injustice, the inhabitants of Anandnagar display an inscrutable acceptance and celebration of life - an attitude that humbles fate and dignifies life.

Come home to Harmony, Indiana, a peaceful slice of small-town America, as Sam Gardner, Harmony-born and raised, begins his inaugural year as pastor to a new flock of old friends, family members, and outrageous eccentrics -- in this unforgettable place where earth-shattering events rarely occur, but small life-altering ones happen daily.
March - The Lovely Bones by Alice Sebold
The book is the story of a 14-year-old girl who is raped and murdered. She tells her story from her personalized Heaven looking down as her family tries to cope with her death and her killer escapes the police.
State of Fear is a 2004 novel by Michael Crichton published by HarperCollins on December 7, 2004. Like most of his novels it is a techno-thriller, this time concerning eco-terrorists who attempt mass murder to support their views. The book contains many graphs and footnotes as well as two appendices and a twenty page bibliography.
Crichton, who spent 3 years studying the theme, included a statement of his own views on global climate change at the end of the book, saying that the cause, extent, and threat of climate change is largely unknown and unknowable. This has resulted in criticism by scientists as being inaccurate and misleading. He warns both sides of the global warming debate against the politicization of science. He provides an example of the disastrous combination of pseudo-science and good intentions, in the early 20th-century idea of eugenics. He finishes by endorsing the management of wilderness and the continuation of research into all aspects of the Earth's environment.
Wide Sargasso Sea is a 1966 postcolonial parallel novel by Caribbean-born author Jean Rhys. After many years of living in obscurity since her last work, Good Morning, Midnight, was published in 1939, Wide Sargasso Sea put Rhys into the limelight once more and became her most successful novel.
The novel acts as a prequel to Charlotte Brontë's famous 1847 novel Jane Eyre. It is the story of the first Mrs Rochester, Antoinette (Bertha) Mason, a white Creole heiress, from the time of her youth in the Caribbean to her unhappy marriage and relocation to England. Caught in an oppressive patriarchal society in which she belongs neither to the white Europeans nor the black Jamaicans, Rhys' novel re-imagines Brontë's devilish madwoman in the attic. As with many postcolonial works, the novel deals largely with the themes of racial inequality and the harshness of displacement and assimilation.

Bloodletting & Miraculous Cures welcomes readers into a world where the most mundane events can quickly become life or death. By following four young medical students and physicians – Ming, Fitz, Sri and Chen – this debut collection from 2006 Scotiabank Giller Prize winner Vincent Lam is a riveting, eye-opening account of what it means to be a doctor. Deftly navigating his way through 12 interwoven short stories, the author explores the characters’ relationships with each other, their patients, and their careers. Lam draws on his own experience as an emergency room physician and shares an insider’s perspective on the fears, frustrations, and responsibilities linked with one of society’s most highly regarded occupations.
Award-winning writer Kim Edwards's The Memory Keeper's Daughter is a brilliantly crafted family drama that explores every mother's silent fear: what would happen if you lost your child and she grew up without you?
On a winter night in 1964, Dr. David Henry is forced by a blizzard to deliver his own twins. His son, born first, is perfectly healthy. Yet when his daughter is born, he sees immediately that she has Down's syndrome. Rationalizing it as a need to protect Norah, his wife, he makes a split second decision that will alter all of their lives forever. He asks his nurse to take the baby away to an institution and never to reveal the secret. But Caroline, the nurse, cannot leave the infant. Instead, she disappears into another city to raise the child herself. So begins this beautifully told story that unfolds over a quarter of a century in which these two families, ignorant of each other, are yet bound by David Henry's fateful decision that long-ago winter night.
October - Perfume--the Story of a Murderer by Patrick Suskind,
An international bestseller, set in 18th century France, Perfume relates the story of Jean-Baptiste Grenouille, "one of the most gifted and abominable personages in an era that knew no lack of gifted and abominable personages".
Born lacking a personal odour (a fact other people find disquieting) but endowed with an incomparable sense of smell, he apprentices himself to a perfumer and becomes obsessed with procuring the perfect scent that will make him fully human. In the process, he creates perfumes—presumably based on pheromones—that powerfully manipulate human emotions, murdering 25 girls to take their scent.
The book features detailed descriptions of the techniques of scent extraction such as maceration and enfleurage.

November - Charles the Bold: the Dog Years by Yves Beauchemin,
Charles the Bold: The Dog Years is the first in a series of four novels that chronicle the life of Charles Thibodeau, a youngster from ’s notorious east end. In this first volume, Yves Beauchemin takes us from Charles’ premature birth in October 1966 to his first term in secondary school. In the first pages the reader realizes that Charles is a special child and that his life is going to be far from ordinary. Although he is “born with a natural gift for happiness,” Charles’ childhood is overshadowed by tragic events. His mother never fully recovers from the birth of his younger sister Madeleine and both sister and mother die before Charles reaches the age of four. Left with his alcoholic father, Charles suffers from the domestic violence Wilfrid Thibodeau repeatedly inflicts upon him. One night the carpenter even attempts to murder his son, who then seeks refuge with the Fafard family.
References:
Wikipedia.com
Amazon.ca

This blog or electronic journal has been created to allow a web record of the activities of this Book Club situated in Ottawa beginning with the 2008 season. This lists the books that were read by its members since 1999.

2019
The Stars are Fire by Anita Shreve. Michèle, Colette hosted.

Posted by Muse and Views Bookclub at 12:28 PM No comments: