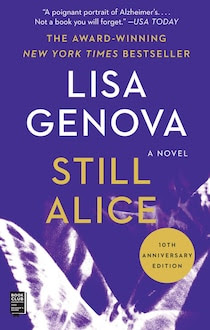 Despite the snow and cold, we had a warm reception at Janet's home, with a roaring fire, lovely wines and juices, carrot cake, great cheeses and dates, and cocktail wieners wrapped in pastry (I'm sure even they wanted to snuggle up in a blanket on a wintery evening.)  In attendance were Janet, Colette, Carla, Shirley, Beth, Betty, Jolene...and Michèle and Linda via Skype. Michèle and her husband had invited Linda and her hubby over for dinner in Florida, so it was wonderful that distance did not prevent their participation in our Book Club.

The votes were tallied, and the prize for the favourite book club read of 2012 went to Betty for The Book Thief.  It was a tight race, which shows just what great books we read as a group last year.

Betty gave us a little insight into the life of Lisa Genova, who wrote Still Alice, the book under discussion this month.  The author's background is in bio-psychology and neuroscience.  She self-published the book because publishers were apparently not interested in the beginning.  Our group had previously discussed Left Neglected, also by Lisa Genova and very popular, but everyone enjoyed Still Alice better because of its readability.   We are not alone in our high opinion of the book since Still Alice has garnered several prizes and was popular on the New York Times bestseller list.   For those who wish to read more by Genova, her newest book is Love Anthony, about autism.

To say that we "liked" Still Alice would not be the right choice, almost too light a word. A better description would be to say that everyone appreciated it. The book was moving and insightful, but at the same time, anxiety-producing as it hit so close to home.  We all related stories about friends and family afflicted with various forms of dementia, though not at such an early age as with Alice.  We enjoyed the way the author was able to relate the story from Alice's perspective, rather than from an outsider's point-of-view.  The book was well written, with good characterization, and even the Alzheimer's Society has endorsed it.  The relationships between Alice and her husband and children were discussed at length.  The feeling was that it is hard to build a strong relationship between spouses once a disease such as Alzheimer's sets in, if the foundation is not there beforehand.  We were all pleased that the daughter Lydia and Alice ended up as close friends, though we felt that the book's ending was a little unrealistic.  Would someone with such a debilitating disease really be able to set up a support group and make profound speeches the way Alice did?  Betty commented that she had spoken to an Ottawa librarian dealing with a loved one with Alzheimer's.  The librarian could not read the book and said there is never a happy ending with Alzheimer's.

Linda suggested a couple of other books to read with respect to Alzheimer disease:
Alzheimer's Disease: What if There Was a Cure? The Story of Ketones by Mary T. Newport, M.D.
Remembering the Music, Forgetting the Words - Travels with Mom in the Land of Dementia by Kate Whouley

All in all, a great choice, Betty.  We would highly recommend the book to others.
Posted by Muse and Views Bookclub at 11:12 AM 3 comments: