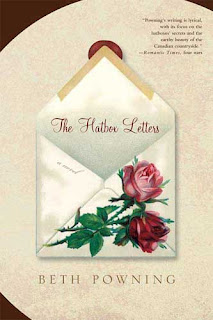 This month's meeting was at Beth's home. In attendance were Beth, Betty, Carla, Colette, Jane, Janet, Linda, Michèle and Shirley. This month's book suggested by Linda was The Hatbox Letters by Beth Powning. Ms. Powning lives in New Brunswick. She has written several books and this is her first novel.

The novel is about a woman who has recently lost her husband and is having great difficulty getting through the grief and moving on with her life. Most members enjoyed the book with some reservation. Many felt that a better editor would have helped the book flow better especially the first part that was filled with adjectives and descriptions that were too detailed. One member read the following passage that she had read to her husband:
"She felt young because she wore no underpants, and she'd shrugged back her bathrobe to show Tom how her breasts were like silver spoon backs."
The member told us that she then went to her cutlery drawer and took out teaspoons, dessert spoons, soup spoons and service spoons and proceeded to ask her husband which ones best represented her breasts! We had a good laugh.
Despite the shortcomings of the book, all felt that Ms. Powning represented a subject, grief, that solicited a lot of thoughtful discussion. Many of us talked about grief and how people we knew pulled through it and continued their lives or never really were able to build a life on their own after the death of a spouse. In finally going through the letters from her ancestors that were in the hatboxes, permitted Kate to imagine their lives and the losses they endured. She often imagined scenes from one or two sentences in a letter. Losing herself in the lives of her ancestors helped her in some ways to pull through the grief and eventually begin a life on her own.
Many members felt she had a good sense of place. Her descriptions of rural New Brunswick, of her home and garden, the river and the sea made it easy to visualize her surroundings. Those of us who are gardeners enjoyed her descriptions of the garden she and her husband Tom had created over the years.
We discussed the reasons why some people seem to survive grief and manage to build a productive and fulfilling life afterwards and that others have much more difficulty getting past the loss of a spouse. Some felt that women who have had an independent life before or during their relationship probably found it easier to build a life on their own after the loss of a spouse while others felt that it depended on making a decision to give of themselves through, for example, volunteer work.
One of our members who had read the book several years ago went back to her notes and had then thought that maybe the writing style, the jumbled thoughts and short sentences of the beginning of the book and then the more thoughtful descriptions and more flowing sentences may have been used to portray how grief affected Kate. At the beginning she was overwhelmed by the loss and unable to think straight and as time passed and she began to accept more her life, the book's writing style changed, became more fluid, easier to read.
Finally all members said that they enjoyed the book with some reservation.
Posted by Muse and Views Bookclub at 9:51 AM 1 comment: