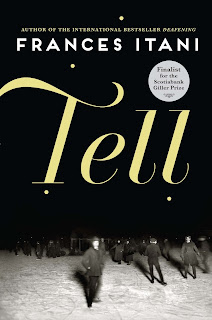 Muse & Views was hosted by Michèle. Present were Beth, Betty, Carla, Jane, Janet, Jolene, Linda, Michèle and Shirley.  Michèle served two dips, a guacamole and a salmon mousse with crackers and vegetables, wine, red, rosé and white.  We had a lovely Strawberry Cloud for dessert with coffee and tea.

The book discussed this month was Linda's choice, Tell by Frances Itani. She was born in Belleville Ontario and grew up in Montreal where she trained as a nurse.  She has lived in several countries such as Croatia, Germany and Austria.  She speaks English of course, French, German and some Japanese.  She presently lives in Ottawa.

This book, Tell, follows several of the characters of her former book, Deafening, that we read and discussed in September 2013. In Deafening the main character was a young girl, Grania, who is deaf. She is present only through correspondence in this book.  The main characters are two couples, Maggie and Em who have been married 25 years and Tress and Kenan a young couple. Tress is Grania's sister.  Both couples are grappling with marital problems in silence.  There are secrets untold and secrets to tell in this novel.

Kenan has come back from the ravages of World War I with both physical and psychological scars. He refuses to talk to Tress or others, refuses to go out of their home because of the physical damage to his face and body. Ms. Itani gives us an excellent account of the way Kenan's horrific physical injuries are markers for his wounded heart and soul. Tress turns to her aunt Maggie to try to find solutions to Kenan's uncommunicative behavior.

But Maggie has problems of her own with her husband Em.  There are secrets between them not discussed that are revealed only near the end of the novel. Their relationship has withered over the years. Late in the novel we find out that Maggie and Em had a personal tragedy that they have never discussed.  Maggie finds solace in other activities and in the director of the local choral society.

Most members really enjoyed this novel. They enjoyed her writing style, the attention to period detail, the discussion of a new author L.M. Montgomery for example. She describes well life in a small town, what is important to people, how they cope with winter.  There is a good flow to her writing. Some were a bit frustrated by the slowness of the novel at the beginning and some felt the end was a bit rushed.  However all felt that character development was excellent; we know the characters well by the end of the book.

Linda corresponded with Ms. Itani and learned that there will be a third book set after WW II with the same characters. There were several questions that are not answered in Tell that we hope will be answered in the last novel of  the trilogy.
Posted by Muse and Views Bookclub at 11:30 AM 1 comment: