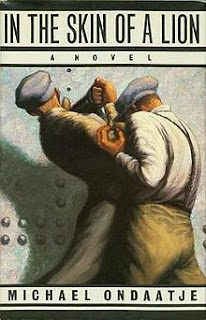 Our host this month was Jane at Colette's home.  Present were Beth, Carla, Colette, Jane, Janet, Jolene, Michèle and Shirley. Jane prepared a great snack for us, some wonderful cheese and pork balls with sauces.

The book choice was Janet's In the Skin of a Lion by Michael Ondaatje.   Mr. Ondaatje is a Canadian citizen born in Sri Lanka.  He arrived as a young man and completed his studies at Bishop's University, University of Toronto and Queen's University.  He has taught at several Canadian universities. He has been awarded 5 Governor General's awards, the Giller prize, the Man Booker prize and France's most prestigious award, the Prix Médicis.

This story is situated in Toronto and some parts of rural Ontario  in the 1930's in settings that are very familiar to people who have lived in Toronto and those who know the Muskoka region well.  This was a part of the novel that many of our members enjoyed because they could visualize the scenes quite easily.  It is a book written of a time when Worker's Unions were beginning to take shape everywhere across the world.  It describes a more seedy and violent side of trade unionists than what we may have witness in our time.

Most members felt that it was certainly not an uplifting story.  However, some felt it reaches through you when you are in pain, and that it takes a particular  frame of mind to enjoy the book and get the most out of the novel.  It is a story of people who living dreadful lives that make them react to events in their life in sometimes inappropriate ways for society.  None of Ondaatje's characters are particularly sympathetic. He  is very descriptive in setting scenes, almost like a script for a play.

Two of the characters in this book come back in Ondaatje's The English Patient, Carravagio and Hana.
Posted by Muse and Views Bookclub at 9:16 PM No comments: