Well we are a little late but here is our contribution completed this month by Shirley by herself!

It by Stephen King – story of children who see that which adults do not.

Keeping with ‘children’ as a link to the books, start with No Time to Wave Goodbye by Jacquelin Michard – the story of a child being kidnapped, a family in crisis.

Followed by A Map of the World by Jane Hamilton where one moment’s inattention ends with the death of a child.

Mercy Among the Children by David Adams Richards is the next link. After pushing a friend off a church roof, Sydney Henderson makes a pact with God that he will live a life without violence providing that the boy lives.

Davita’s Harp by Chaim Potok is told from young Davita's point of view and we often share her frustration as she understands that very important things are happening and all she can do is wait to be told or try to figure it out for herself. As the deprivations of war and depression take a ruthless toll, Davita unexpectedly turns to the Jewish faith.

Also by Chaim Potok, the next link might be to The Chosen. This tells of the relationship between two Brooklyn boys Danny and Reuven, the world they grow up in, and their relationship with their fathers. The two negotiate adolescence, family conflicts, and the crisis of faith.

And the final link is The Apprenticeship of Duddy Kravitz by Mordecai Richler. This is the story of the third generation of a Jewish immigrant family in Montreal. Duddy is combative, amoral, scheming, a liar, and totally hilarious.

This list makes the leap from the fright-inducing stories of Stephen King’s It to the hilarious Duddy Kravitz which is more in keeping with the Muse and Views book club selections.

Thank you Shirley!  Merry Christmas and Happy Holidays for all!
Posted by Muse and Views Bookclub at 3:12 PM No comments: 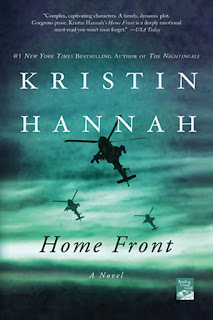 We met a Beth's home to discuss Shirley's book choice Home Front by Kristin Hannah.  Present were Beth, Carla, Colette, Linda, Michèle and Shirley.  Beth offered us a very nice array of hot and cold canapés along with a variety of nuts and sweets.  Of course we had the usual wine, red and white and tea and coffee.

Home Front is a timely and intimate look at the effect of a deployment on a family.  Jolene, a helicopter pilot in the Reserves is deployed to Iraq and Michael, her husband, who is a lawyer, finds himself with the responsiblity of taking care of his daughters and keeping the home going.  As Jolene is about to leave, Michael expresses his doubts about their relationship.

We all found the book to be a pager turner and easy read as the writing style is very straight forward.  The characters were well described and we found our feelings towards them changed as the situation changed.  Life on an Iraq base was well described, the heat, the dust and sand, having to line up to call home, the line ups for showers all made the difficult life soldiers had real.

The author described well the anger the characters felt,  Jolene’s inablity to speak out and Michael's concentration in his work to the detriment of his family, his inability to understand what Jolene was doing and the importance of her work for her as a person and a soldier.  She did a good job of describing the transition Michael went through as he found himself responsible for his children and the effect it has on his feelings towards Jolene.

One of our members remembered that Tolstoy's Anna Karina begins "Happy families are all alike; every unhappy family is unhappy it its own way." It is a good description of this family and its struggles.

Thank you Shirley for an interesting read.


Posted by Muse and Views Bookclub at 1:51 PM No comments: