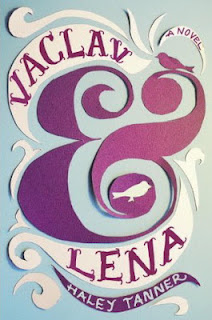 This meeting was hosted by Linda at Shirley's home.  Present were Beth, Betty, Colette, Janet, Jolene,  Michèle and Shirley.  Linda provided the hors d'oeuvres and wine but unfortunately was not able to come to the meeting.   The book recommended was Beth's choice, Vaclav and Lena by Haley Tanner.

The story revolves around the lives of two young russian immigrants in New York who meet in an ESL class at school.  Vaclav who lives with his parents is fascinated by magic and wants to perform as a magician on the boardwalk of Coney Island.  Lena's childhood at the beginning of the story has been much less stable.  She spends all her time at Vaclav's home and is his beautiful magician's assistant.

All members enjoyed the book and found it an easy read, an excellent "visual" story.  The descriptions of Vaclav's home, the kitchen, the smells of borscht, the living room and Vaclav's father sitting on the sofa with his vodka are easy to imagine.  Ms. Tanner's descriptions allow us to picture the characters and their surroundings as we read the story.  She uses, in dialogue a choice of words that lets you "hear", as you read,  the accent of immigrants from Eastern Europe.  An excellent example, in the first part of the book is Vaclav speaking to Lena as he convinces her that practicing the magic tricks is essential.  "Lena, what we are having here is perfect introduction to the act."

We also found that the principle characters in the novel are well developed and scenes well described.  We can feel Rasia's, Vaclav's mother, love for her son. The description of Lena's "grandmother" dead in the shower and Lena's reaction as a 5 year old child who has been deprived of love and affection is very easy to imagine.  We identify with Lena's teenage angst in the school bathroom when she locks herself in one of the stalls on her 16th birthday.

Some of us found the ending a bit abrupt and wondered if there will be a sequel.  Thank you Beth for a good choice as our book before the summer break.

Posted by Muse and Views Bookclub at 2:06 PM No comments: