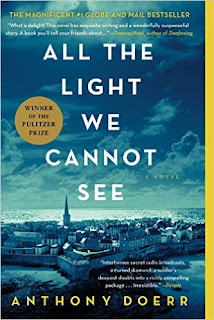 Our host this month was Colette. Present were Carla, Colette, Jane, Janet, Linda and Michèle. Our book this month was Jane's choice All the Light We Cannot See by Anthony Doerr.

The story takes place in France and Colette served some delectable french cheese and mini-omelets inspired by a passage in the book "Eggs crack. Butter pops in the hot pan................all of Marie-Laure's attention is absorbed by the smells blooming around her: egg, spinach, melting cheese."  Colette also served a peach cheese cake again inspired by what Madame Manec served Marie-Laure "....Marie-Laure can hear a can opening juice slopping into a bowl. Seconds later, she's eating wedges of wet sunlight."

Anthony Doerr is an American author who has written many short stories and published two collections of short stories, a memoir of his time in Rome and two novels.  All the Light We Cannot See is his second novel.  It took him 10 years to write it.  He first started with the idea of telling a story about radio transmission and the wonder of being able to hear someone speak who could be very far away. In a visit to France he visited the walled town of St. Malo and decided to use it as the setting of his story.  He also became interested in all the treasures and art in Paris that were hidden away before the German invasion and incorporated these three subjects into the story. It won the 2015 Pulitzer Prize for fiction.

The story has two main characters, Marie-Laure who is a young blind french girl whose father is the locksmith at the Paris Museum of Natural History and who finds herself with her father escaping to the town of St. Malo.  The other character is a young German boy Werner who with his sister are orphans. Werner because of his talent for fixing radios finds himself in a military school for talented boys run by the Nazis. He also finds himself in St. Malo with Nazi officers.

Everyone enjoyed the book. All thought the characters were well developed and that there was no stereotypes, for example, not all Germans are villains. We learn to understand and like both Marie-Laure and Werner. Marie-Laure's relationship with her father is touching.

One of our members summarized the writing and what is encompassed in the story very well. "The writer brought together many currents underlying the war in an original way: industrialization and technology; human talent and creativity; art and historical treasures; love, compassion, bravery and sacrifice, etc. " Thank you Beth.  Also though we all enjoy a happy ending, everyone agreed that the tragic ending of this story was realistic and appropriate.  All in all, a very well written story.

We also discussed the meaning of the title All the Light We Cannot See.  There are references to light and the lack of light in many places in this book.  First of all, Marie-Laure's blindness and in one of the broadcasts about light that Werner and Jutta listen to, there is a revealing description. "What do we call visible light? We call it color. But the electromagnetic spectrum runs to zero in one direction and infinity in the other, so really, children, mathematically, all of light is invisible."

Thank you all for an excellent discussion.
Posted by Muse and Views Bookclub at 3:57 PM 1 comment: