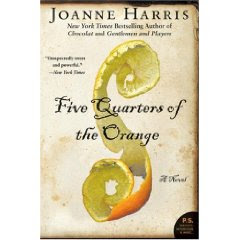 This month's meeting was at Michèle's home. In attendance were Betty, Colette, Jane, Janet, Jolene, Michèle and Shirley. As Framboise made in her creperie called Crèpe Framboise, Michèle made some galettes bretonnes served with a confit d'oignons and a goat cheese served with a fig jam. For dessert, a clafoutis aux pommes et abricots secs as was described in Mirabelle's book.

The first item of our meeting was awarding the "Academy Award" prize for the most well-liked book in 2009. The Guernsey Literary and Potato Peel Pie Society which was Colette's book won hands down. Colette gave her prize to Jane since she had originally recommended the book.
This month's book, Michèle suggestion was Five Quarters of the Orange by Joanne Harris. The Book Club read Chocolat by Joanne Harris in 2001. Joanne Harris is a British author born of a French mother and British father. Many of her books are set in France. Five Quarters of the Orange is the last of three books with a food theme, Chocolat and Blackberry Wine are the other two books. She says on her website that this was one of her favourite books to write because of Framboise, the main character. You can read her comments on this link of her website.
Many members commented on the excellent character development in this book. Both Framboise and her mother Mirabelle are quite believable and easily pictured. Though both are not particularly "charming" characters, we were still drawn to them. Mirabelle did not seem particularly "motherly" however it became quite obvious that she did everything to keep her children fed, clothed and safe during the German occupation in WW II. Ms. Harris also described scenes and places well keeping your interest in the story.
Members also found the descriptions of the German occupation quite believable and interesting to see how the WW II affected the parts of France where there was no fighting but German soldiers everywhere. Michèle points out that in almost all villages in France there is a memorial to those who died during WW I both not much to honour those who died in WW II. There are some memorials to honour the those who were in the Resistance only.
Some members commented on the mother/daughter relationships in this book, Framboise and Mirabelle, Framboise and her daughter. The book Mirabelle created writing her thoughts and recipes helped Framboise better understand her mother and brought her closer to her own daughter Pistache.
Jolene, who always brings something a bit different and interesting to the discussion saw in the description of "Mother" the Pike as similar to pighead on a stick in Lord of the Flies.
All , in all, everyone enjoyed the book. Michèle suggests those who particularly enjoy Joanne Harris' writing might want to try Holy Fools and The Lollipop Shoes.
Posted by Muse and Views Bookclub at 7:16 PM No comments: