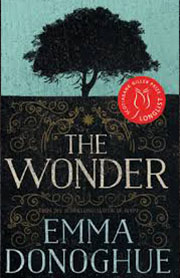 We met at Janet's home to discuss Carla's choice The Wonder by Emma Donoghue.  Present were Betty, Carla, Colette, Janet, Jolene, Michèle and Shirley.   Janet was tempted to serve us just 2 teaspoons of water and porridge but lucky for us relented and served some wonderful cheese including an irish  cheddar,  sausage rolls and a quite wonderful Irish whisky cheese cake.  Of course wine, coffee and tea were also served.

Carla gave us a short biography of Emma Donoghue who is the author of the very popular novel Room.  She was born in Ireland and lived in England and has settled in London, Ontario.  Ms. Donoghue has written several books and will publish this coming Spring her first YA book.

The novel is set in the Irish midlands in the 1860's not long after the potato famine in a village steeped in superstitions and the mysteries of the catholic faith. A young 11 year old girl, Anna O'Donnell, has stopped eating and after four months the curious and believers have begun to visit to witness this "miracle" or "medical anomaly" since she seems in good health.  The notable men of the village, the priest, the doctor and others decide that there needs to be proof that she is not eating and hire an English Nightingale trained nurse Elizabeth Wright and a nun to watch Anna over a two week period.  Lib, the nurse decides immediately that this is a hoax and in a couple of days she will be able to discover how Anna is secretly fed.

It is safe to say that this is not the most popular book we have read as a group.  Only two of our members present actually enjoyed the book.  It was for these two members a page turner, a suspense novel with an interesting plot line and believable characters.  The bleakness of the countryside and the difficult lives of the poor in villages just coming out of the potato famine were well described.

However, the majority were more critical of the book.  Many felt that there was too much of the book described Lib, the Nightingale trained nurse, watching Anna O'Donnell the 11 year old child who refuses to eat.  They felt that it was very repetitive and that not much happened until the last third of the book when we discover why Anna is fasting and what Lib does to save Anna.  All of us found the ending unbelievable.  Could Anna really get her health both physical and mental back and live a happy life with these new parents in a new country?  Some also criticized the writing style using a third person narrative but allowing only the thoughts of Lib to be described.

As is usual with a book that our members have mixed opinions, the discussion was lively and interesting.
Posted by Muse and Views Bookclub at 3:47 PM No comments: