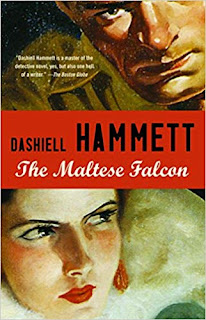 Our September meeting was hosted by Linda. We spent a wonderful half hour catching up on our activities over the summer. Present were Beth, Betty, Carla, Colette, Janet, Linda, Marg, Michèle and Shirley.  There was a nice variety of cheese, sausage and crackers along with of course, wine, coffee and tea and Linda had two types of cheesecake!

This month we discussed Colette's book choice, The Maltese Falcon by Dashiell Hammett, a classic detective mystery. Dashiell Hammett is often considered as the "dean" of hard-boiled detective fiction. He began writing when he worked for the Pinkerton National Detective Agency.  He wrote not only novels, but also short stories and was a screenwriter.  He was a political activist and did prison time for refusing to name members of the communist party.

Most members enjoyed the book.  The Maltese Falcon was originally published as a serial in the magazine The Black Mask.  Sam Spade the main character and detective re-appeared in lesser known novels but became well known when the movie came out and Humphrey Bogart played Sam Spade. The style of the book read very much like a a script.  There is considerable description of the environment, what rooms look like, the style of a car, the clothes characters wore, how they held a cigarette, how they wore a hat.  There is very little about the thoughts or emotions of the characters themselves.

A couple of our members did not enjoy the book as much and though it was published in 1931, felt that women were type cast and not at all equal to the male characters.

Members however, appreciated reading a classic detective story giving us some context for more modern novels of the same nature.
Posted by Muse and Views Bookclub at 10:43 AM