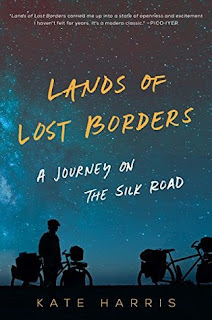 Our May meeting was hosted by Betty.  Present were Betty, Carla, Colette, Jane, Linda, Marg, Michèle and Shirley.  Betty served a nice array of cheese and crackers, olives, pepperettes and of course wine, coffee and tea.

We discussed Carla's book choice, a memoir, Lands of Lost Borders by Kate Harris.  Ms. Harris is a young Canadian writer and "wanderer" as she calls herself.  She is originally from Ontario and presently lives off the grid on the border between the Yukon and British Columbia.  She studied sciences and the history of science in Canada, Great Britain as a Rhodes Scholar and in the United States.  She abandoned her Ph.D. studies at M.I.T. to cycle the Silk Road with a childhood friend Mel Yule. The book chronicles their voyage that lasted almost a year.  Beginning in Turkey they travelled through Georgia, Kazakhstan, Uzbekistan, Kyrgyzstan, Tajikistan, China, Nepal and India.  At the beginning of the book she describes her childhood with her family and her goal to eventually visit Mars.  She is well read, quotes philosophers and well-known writers and historians.

She received many honours and prizes for Lands of Lost Borders including the most prestigious Canadian prize for non-fiction the RBC-Taylor Prize in 2019.  She was a Rhodes scholar and a recipient of the Morehead-Cain Scholarship, an American version of the Rhodes Scholarship.

The reviews were definitely mixed.  Many found that her writing, descriptions and stories of this adventure were very introspective.  She wrote a lot about how she felt, how she experienced the journey.  Though she rode with her childhood friend Mel Yule, we do not come to know Mel well.  She does not go into great detail in describing the families that helped them along the way, those who allowed them to pitch their tent on their property or actually sleep and eat with them.

However her descriptions of how she lived this adventure, her descriptions of the terrain, the problems they encountered are very vivid and easy to understand.  Certainly for us as women of a certain age and family status, the adventures she described and her enthusiasm for them is very foreign to us.  Not many if any of us have dreamt of an adventure of this magnitude!

There are lots of photos and videos on her website Kate Harris that help us visualize what she described.

Posted by Muse and Views Bookclub at 12:57 PM