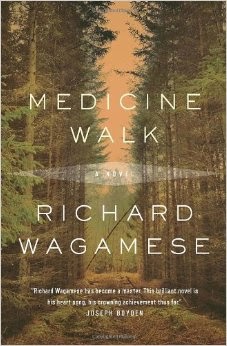 The story is about a 16 year old boy Frank of aboriginal descent who lives on a small farm with an "old man". Frank's father Eldon left him at the farm when he was one week old. The "old man" raises Frank as if he was his own son also taking care to teach him as much as he can of the traditions coming from his aboriginal roots. Throughout Frank's young life, his father appears every once in a while, always disappointing him. When Frank is 16 his father sends for him.  He is dying and he wants to be buried as an Objibway warrior sitting upright facing east and he has a particular place on a cliff overlooking a valley where he would like to be buried. He asks that young Frank take him there. Frank sees this journey as his responsibility and as they journey towards the cliff, his father tells him the story of his life and the circumstances of Frank's birth.

Jane begins the meeting by explaining to us the four sacred medicines, sweetgrass, sage, cedar and tobacco, their significance and their use.  Jane also gave us a graphic of the The Seven Grandfather Teachings  that is often used to teach the traditions and ways of aboriginal people.  We each left with a small pouch of tobacco that she prepared for us.

Richard Wagamese is Objibway originally from Northern Ontario.  He now lives in British Columbia. He is a journalist, having written many articles and books.  Medicine Walk is his 11th book. He has recently written an essay Speaking My Truth  in which he explains the impact Residential Schools has had on his life.

Everyone enjoyed the book and found it very well written.  The descriptions allow us to "see" the scenes, "smell" the woods, the farm, the taverns and the description of the journey toward Eldon's final burial allows you to travel with them.  The landscape becomes a character, it is a part of everything in the story. The prose is beautiful, with a rhythm that is not rushed. We sense and understand the ravages that Eldon's alcoholism has on his life and on Frank's, the complications it brings to their father/son relationship.  Those of us who have recently lost a parent, found Frank's observations of the ravages of illness on his father particularly poignant and sad.


This was an excellent choice, thank you Jane.

Posted by Muse and Views Bookclub at 4:13 PM