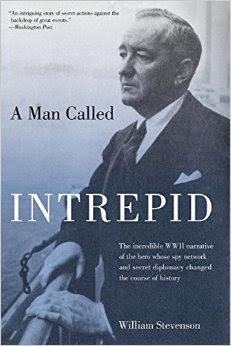 We are discussing Linda's choice this month A Man called Intrepid by William Stevenson. Linda is hosting at Shirley's home. Present are Betty, Carla, Colette, Jane, Jolene, Linda, Michèle and Shirley. Pinwheel sandwiches, British cheese and a wonderful chocolate cake with ice cream and strawberries is served with of course wine, coffee and tea.

The book, published in 1976 is a bit of a biography of William Stephenson but much more an account of the creation of the world's first coordinated Secret Intelligence Service by Winston Churchill and how its first chief, William Stephenson, operated.  It documents how the BSC (British Security Coordination) was able to get from Poland the German's Enigma Coding machine and was then able to obtain information about the German tactics and many other operations that eventually helped the Allies win WW II.  It also documents the creation of a training centre in Ontario near Oshawa.

We learn about campaigns such as Dieppe that Allies knew would be a massacre but that it was a means to an end. We learn about how so many people at first did not understand what Hitler was doing.