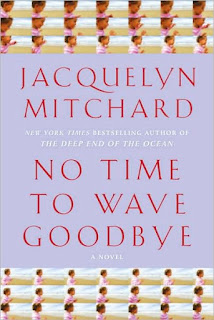 We met at Michèle's home.  In keeping with the fancy atmosphere of Academy Awards night in the book, we were served a pâté and cheese ball covered in caviar and a nice avocado herb dip with vegetables.  A refreshing fruit salad with lime, lemon and orange sugar cookies was our dessert.  Of course wine was served as usual.  We discussed No Time to Wave Goodbye by Jacquelyn Mitchard presented by Linda.

This story continues the saga of the Cappadora family that begins in Ms. Mitchard's novel The Deep End of the Ocean.  Linda mentions that she had not realized when she picked up this book and chose it for us that it was a follow-up.  Some of our members had read The Deep End of the Ocean but many had not.  Ms. Mitchard has written several novels both for adults and young adults.  Linda, Shirley and Michèle had the opportunity to speak with her via Skype and had an interesting and very pleasant conversation about the extensive preparation and research she does before writing a novel. We also talked about how she arrives at the ideas and plots for her books.  She indicated that she draws many of her ideas from real-life stories related in the media or articles she reads.

The Deep End of the Ocean, the first book about the Cappadora family was critically acclaimed and became the first book of Oprah Winfrey's Book Club.  No Time to Wave Goodbye, the follow-up and the story we read this month received more mixed reviews.  As most of us had not read the first book, we found that we were not able to relate as well to the characters and found some of the issues in the book confusing.

Many found the beginning of the book slow but eventually found that it was a page turner, suspenseful and the happy ending pleased all of us.  Linda, who has now read several of Ms. Mitchard's books recommended we read The Deep End of the Ocean.
Posted by Muse and Views Bookclub at 12:59 PM