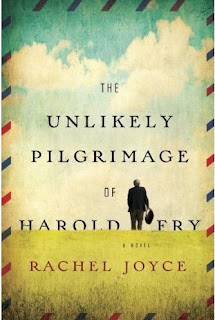 Linda hosted this month's meeting at Shirley's home. Present were Beth, Colette, Jane, Janet, Jolene, Linda, Michèle and Shirley. We were served excellent cheese, a vegetable dip with a wide variety of veggies and a ring of nice pink shrimp with sauce, along with of course wine.  Linda served us a wonderful gluten free carrot cake and fruit with a chocolate sauce, wonderful for those of us with a sweet tooth.  We discussed Beth's choice, The Unlikely Pilgrimage of Harold Fry a first novel by Rachel  Joyce.

Ms. Joyce developed a career writing radio plays and working as a stage actress.  This first novel won the "Writer of the Year" of the National Book Awards 2012.   She developed this novel from a radio play To Be a Pilgrim that won the 2007 Tinniswood Award.  Her second novel Perfect, will be available July 4, 2013.

A pilgrimage has it origins in religion and in spirituality.  There are many reasons why someone will head out on a pilgrimage. It can be connected to a person's faith, some will walk a pilgrimage to seek forgiveness for wrongs done, to reconnect with their inner self, to begin a new stage of their life.  Harold's was an "unlikely" pilgrimage since he started out just to mail a letter and just continued.

There have been many books written about pilgrimages and pilgrims, The Pilgrim's Progress from this World to That Which is to Come was written by John Bunyan and published in 1678.  The Canterbury Tales written by Geoffrey Chaucer in the late 14th century is a collection of stories told by a group of pilgrims. The most famous pilgrimage is the Camino de Santiago in Spain and has resulted in many books, the most famous, from the Brazilian writer Paul Coelho The Pilgrimage and The Alchemist.

Everyone enjoyed the book very much and found it a quick and easy read. It had elements of mystery, a love story and is in a travelogue format. The map at the beginning of the book allows you to follow Harold's journey. The character development is excellent.  All three of the main characters, Harold, Maureen and Queenie are easily imagined and their actions and thoughts give us a good notion of who they are as persons. The relationship between Harold and Maureen is also well described and the changes they go through as Harold walks, each separately and then as they begin to communicate gives this novel a positive story line.  You cheer for them more and more as Harold progresses on his walk.  There are sections of the story when Harold or Maureen are discouraged and as you read about their son David it tugs at your heart strings.  However, the positive story line wins out. Harold's pilgrimage helps him heal and rediscover a self-worth and rediscover his love for Maureen as she also, alone in their house, begins to live again, to open up and see a better life with Harold.

There were many other references that were brought to mind in reading this story; Robert Browning's poem Love Among the Ruins, Notes from a Small Island by Bill Bryson.  It was also noted that men in British novels are often described as repressed such as in Major Pettigrew's Last Stand or the Rector Mr. Michael Mompellion in Year of Wonders.  We could even include Mr. Darcy in Pride and Prejudice.

Often when we read a book that everyone enjoys, our discussion is shorter and less animated.  However, it is a testament to the quality of the writing and the story of the book that we had a very lively discussion.  Thank you Beth for an excellent choice.

Have a great summer everyone!
Posted by Muse and Views Bookclub at 10:37 AM