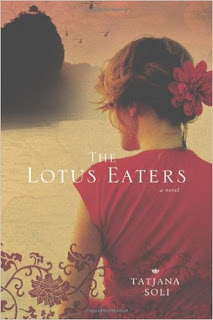 Our host this month is Beth.  Present were Beth, Carla, Colette, Janet, Jolene, Linda, Michèle and Shirley. The book this month, was Shirley’s choice The Lotus Eaters by Tatjani Soli.

Born in Salzburg, Austria, Tatjani Soli moved to California to study at Stanford and stayed first making her name as a short story writer. The Lotus Eaters was her first novel.

The story The Lotus Eaters  covers love and obsessions, adultery, war photography, the Vietnam war, American distrust of their government,  shock, descriptions of Vietnam, in every shade of green. It questions if war journalism changes public opinion. Does it mean we become numb to all the violence? Some of the characters in the story are based on real persons. Linh was based on a real Vietnamese spy. Darrow and Helen are based on a journalist and a woman photographer..

Most of us liked the book, all mentioned that they learned a lot about Vietnam, the war, photo journalism.

We learned a bit about Vietnamese culture and traditions. One of the traditions that stood out was the beautiful courting traditions in Vietnamese villages such as singing to each other from one side of the river to the other.

Ms. Soli was able to bring out the brutality of war, how even those fighting and those present to relay the stories of the war did not think of the suffering of the civilian population and humanitarianism was rarely present in her descriptions.  An example is Helen’s reaction to the child that tries to follow her as she is running through the streets at the beginning of the novel. They did not think of the civilians in a humanitarian way.

Ms. Soli also had very detailed descriptions of living in Vietnam, the culture, the landscape, the moutains, villages, the light where the sun fell.

Helen, Darrow and Linh were well developed as characters,  Helen who had come to Vietnam in the beginning to find out what had really happened to her brother, becomes obsessed by photojournalism.  She sees herself as someone who can let those at home know what is really happening through her photographs. She is terrorized by all she sees but learns to mask her terror. When she takes a soldier’s picture and he dies minutes later, she just keeps moving.   In an interview Ms. Soli says “the rage that filled her felt good, weighted her like a good meal or a strong drink, felt better than fear. The rage filled her so that nothing else could get in.” Helen was probably suffering from PTSD when she went back to the States.

Some of us wondered about the title The Lotus-Eaters. It comes from The Odyssey – Book 9.  What happens to those who eat the lotus fruit are as much the journalists and the soldiers.

Reluctantly, Odysseus tells the Phaeacians the sorry tale of his wanderings. From Troy, the winds sweep him and his men to Ismarus, city of the Cicones. The men plunder the land and, carried away by greed, stay until the reinforced ranks of the Cicones turn on them and attack. Odysseus and his crew finally escape, having lost six men per ship. A storm sent by Zeus sweeps them along for nine days before bringing them to the land of the Lotus-eaters, where the natives give some of Odysseus’s men the intoxicating fruit of the lotus. As soon as they eat this fruit, they lose all thoughts of home and long for nothing more than to stay there eating more fruit. Only by dragging his men back to the ship and locking them up can Odysseus get them off the island.

Posted by Muse and Views Bookclub at 4:59 PM