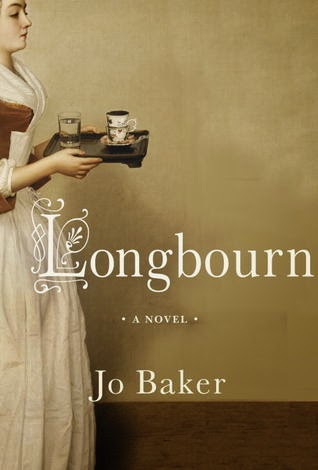 Despite the continuing winter weather even if Spring has officially arrived, we had nine of our eleven members present ; Beth, Betty, Carla, Colette, Jane, Janet, Jolene, Michèle and Shirley attended the meeting.  The book choice this month was Longbourn by Jo Baker, Jolene's choice.  Jolene also hosted and we were served wonderful British cheese and "bangers" in pastry with mustard.

Jolene, who is a big Jane Austen fan, gave us all bookmarkers she had made herself with quotes from Jane Austen books and from Ms. Austen's letters to her sisters and cousins.

It is unusual that we all agree on a book.  Longbourn was enjoyed by everyone and again contrary to previous discussions on a book when everyone has a similar opinion, a considerable amount of discussion was generated by this storyline. Jo Baker is a British author who has a Ph.D. in English literature. She did her thesis on the author Elizabeth Bower.

There have been several books written by others that have tried to continue the Bennet Family saga or given another perspective on the story of Pride and Prejudice. Not many have succeeded. Longbourn tells us the story of those who served the Bennett Family in Jane Austen's Pride and Prejudice. We were pretty well all in agreement that Ms. Baker did excellent work in creating a credible story.

The story has a very good plot involving most of the servants, Mr. and Mrs Hill, the butler and housekeeper, the housemaids Sarah and Polly and James the footman.  The focus of the book is on the chores the servants must perform to meet the needs and demands on the Bennett Family.  And the descriptions are fairly graphic letting the reader understand that cleaning silk dresses that have been worn walking through wet fields and mud is difficult, that emptying chamber pots is not pleasant work. It was obvious through Ms. Baker's descriptions that serving a family was hard physical work for all the servants.

Ms. Baker's plots were based on the lives and adventures of the servants. Though she did refer to some of the Bennett girls' activities, the stories were in large part about the characters downstairs, the love affair of James and Sarah, Mrs. Hill's relationship with Mr. Bennett, etc.

Some of us found some revelations a bit shocking and maybe incredulous, I will not go into detail to not give away some of the surprises.  Several of us found the conclusions and what happened to some of the servants to be far-fetched. For example, could someone of Polly's social stature really become a teacher?

The book was very much appreciated by all members present, a good read, thank you Jolene.
Posted by Muse and Views Bookclub at 1:15 PM