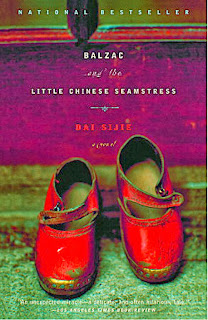 This book generated a lot of comment and discussion.  Most of us enjoyed the book and found that it gave us a better understanding of China's Cultural Revolution and its impact on what could be considered China's elite in the late 1960s.  The two main characters in the story are two young men, Luo and the narrator in their late teens who are sent to the countryside to be "re-educated".  Both are from families of professional parents who had access to books by foreign authors such as Balzac, Stendhal, Dumas, Flaubert and many others.  All of these authors, any literature that was not Chinese was banned. The story revolves around the discovery that a young man in another village has a suitcase full of banned books and the two young men's desire to obtain the books.  They are hungry for the diversion that such literature can bring for them. They have met a tailor who has a beautiful young daughter, the little Chinese seamstress, and Luo who is infatuated by her, wants to "re-educate" her by reading to her from these books.

We all found that the author was very good at describing the surrounding countryside, giving us vivid description of the mountain scenery.  He was also very good a depicting the atmosphere when Luo and the narrator told stories to the chief and the villagers after viewing movies in a nearby town.  We discussed extensively, Luo's relationship with the seamstress, his desire to "re-educate" her and the parallel between what was happening to them and what Luo was doing to her.  We also found that there was a fair amount of humour in the book, the chief's rotten tooth incident, the buffalo they pick to sacrifice, the scene when Luo and the narrator are hidden under the beds as examples.

Beth gave us the title of a book Life and Death in Shanghai that is a memoir written by Nien Cheng about her experiences during and after the Cultural Revolution. Those who want to know more about the impact on the elite might want to read this book.

Jane, in introducing this book, gave us some information about authors such as Honoré de Balzac, Alexandre Dumas, Victor Hugo and Gustave Flaubert among others.  She also talked about Bernard Pivot's program on French television, Apostrophe.  Mr. Pivot's program was very popular in France and Québec and he interviewed Dai Sijie in 2001. Those who understand enough French might want to take a quick look at this video of the interview.  In the interview Dai Sijie admits that this novel is partly biographical.  The video is a little over 7 minutes.

Some of our members have seen the movie that was directed by Dai Sijie and said that it is very similar to the book with the exception of an ending that has the two young meet 20 years after their "re-education".  It is well worth watching.

Thank you Jane for a great read!

Posted by Muse and Views Bookclub at 1:54 PM