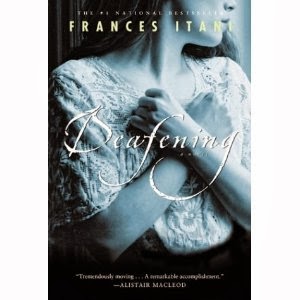 Janet hosted this month's meeting.  Present were Beth, Colette, Janet, Jolene, Linda, Louise, Michèle and Shirley.  We were served a nice healthy dip with vegetables, a variety of cheese,  a wonderful pastry with cheese and caramelized onions and of course a chocolate dessert.  Wine and coffee and tea were also available.  We discussed Shirley's book choice, Deafening by Frances Itani.

Frances Itani is a Canadian author who presently lives in Ottawa. She trained as a nurse and then completed a Master's in English at the University of New Brunswick.  She met and became friends with W.O. Mitchell and Rudy Wiebe.  She has written 13 books, poetry, short stories, children's books and novels.

Deafening is the story of Grania a young girl at the turn of the century who becomes deaf after a bout of scarlett fever at age five.  The novel tells of Grania's struggles to understand and be understood in her family, her experiences when she is sent to the Ontario School for the Deaf in Belleville and her mariage and relationship with her soldier husband Jim who is a stretcher bearer in World War I.

Most of us enjoyed the book though some found the beginning slow. As many of us enjoy a novel that allows us to learn something new, this book, gave us an insight into the world of the deaf, the controversy within that world between sign language, lip reading and teaching the deaf to speak. We also learned, through Jim's correspondance while on the battle fields of WWI, about the horrible experiences in the trenches and the difficulty of re-integration for former soldiers after the war.

Most found that Ms. Itani writes well and we found the book very narrative, almost like two stories within the book.  Some found that the story lacked drama.  For some of us who enjoy descriptions of everyday life, the imaginative childhood life of Grania and her sister Tress were well described and the bond between the sisters is very evident.  Mamo, Grania's grandmother was a favourite character and we learn to love her pragmatic outlook on Grania's future and what was needed to ensure she had the most  normal life possible.

Thank you Shirley for an enjoyable read.

Over the summer, Linda gave us some homework to do for this meeting.  After learning about the BBC radio program Desert Island Disc , she challenged us to come back with three favourite pieces of music and what one luxury we would bring to a desert island.  We spent quite an interesting half hour discussing our favourite music and what luxuries we would treasure.

Posted by Muse and Views Bookclub at 8:29 PM 1 comment:

Monday May 26, 2014 -  Betty's book choice Call the Midwife by Jennifer Worth, Shirley hosting