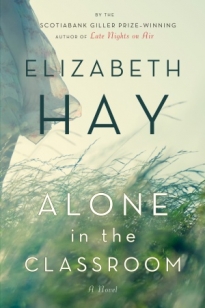 Janet had originally chosen the book because of its setting, with both Saskatchewan and Eastern Ontario figuring in the story.  It was clear from a look at the author’s biography that she often connects events in her stories with those in her own life.  She is now based in Ottawa, but has travelled widely and has lived in such diverse places as Owen Sound, Wiarton, London (England), Guelph, and even Latin America and the Queen Charlotte Islands.  She has written several books, most notably Late Nights on Air, a Giller Prize winner, inspired no doubt from her days as a broadcaster.

Alone in the Classroom received mixed reviews from our group.  Even Janet said that the book didn’t live up to expectations.  She admits regret at having gifted it to her mother-in-law, who during her lifetime had been a teacher in a one-room classroom.  The book does, however, show that people with a dark past sometimes cover up their problems by moving to small towns in need of professionals like the character Parley Burns.

Most of our group agreed that the book had some good moments, with description and characterization being its strengths, rather than plot.  The influence of teachers struck a chord.   (The author likened good teachers  to people who may dip grey pebbles—children --into water to bring out their beautiful colours.)  References to Thomas Hardy, mustard gas, the dust bowl, and the Great Depression were also appreciated.  Jane did note inaccuracies regarding monarch butterflies, and others commented on how contrived the story seemed to be, with characters coincidentally crossing paths too often.   The biggest criticisms were that the narration jumped around a lot from Anne to Connie and that there was little resolution to the mysteries in the book.  For most, the story had a promising start but a disappointing finish.  Several ladies did say, however, that Hay’s writing was strong enough that it might prompt them to read another of her novels.
Posted by Muse and Views Bookclub at 10:24 AM 1 comment: